We would like to warm you up a bit for a season of passionate people all over the world. This video gives you an insight of how we traveled around and recorded over 100 artists. The song we are previewing is called the Backpack Blues, written by Tobias Raphael Schober, Nafi-Harald Weiße, Matovu Robson, Inge Persoon, Coen van den Brand and Jennifer Ann Fritts. Also, you will see Jayaprakash Menon singing the intro. We're looking forward to broadcasting a wonderful season of original music and art.

The making of 'No more exploitation'

The info-graphic above shows how we recorded the song 'No more exploitation'. First we recorded a bass in Pondicherry, India. Mishko M'Ba plugged his bass into the recorder. His reference was just a metronome.

Four months later we passed the headphones on to Dika, a drummer from Pangandaran, Indonesia. He gave the track more body by playing the second layer. At this stage it could still become just about anything. The same month we recorded vocals (Joe N Zep, Pangandaran) and guitar (Romy, Malang).

Joe N Zep, the singer of this track developed the concept 'No more exploitation'. He sang the chorus about Mother Earth. Joe was an incredibly motivated musician. He rocked up at our hotel and needed just one take. Now the song had a subject.

Seven months later during our road trip in Australia we met Matty Cass, opened up a couple beers and he wrote some lyrics for the open parts. It was one of those creative moods inviting us to write and play around. So I wrote a bit of Dutch rap and played some sax which I recorded later on.

After finishing the audio recording, I mixed the layers a bit. I tried to give the separate bits their own place in the big picture; though I don't want to change the sound too much. It's challenging to find the right balance. But I just love doing it.

At this stage, I could start editing the video clip. According to Joe's concept, I used some nature shots. A reef shark, clown fish and turtles at the Perhentian Island in Malaysia. The atmospheric bits really worked with this song.

Check out the result

After broadcasting a few episodes on our YouTube channel we've taken notice of our feedback. We found out that some things need to be a bit clearer. We could sense that people liked the videos. After explaining to them what we're actually doing, our intention became more clear. Viewers didn't seem to get it instantly.

A lot of our viewers had in mind that we arrange recording sessions with complete bands, that we use existing songs or that we ask people to play pre-composed layers of music, but it's not. As you might already know now, songs are composed in different layers. Regularly a new track starts with a percussion layer, then a layer of bass, a layer of guitar and finally the vocals (obviously any order could work).

Maybe our videos didn't communicate clearly enough that our songs are collaborations of people who've never met. Our songs have been recorded separately in different locations. Layers (melodies, lyrics and rhythm) are created by the artists. Pretty much our only criterion is to create original music. We want to let different worlds come together in a new creation.

Yeah! Dutch national TV did an item about the project. I really felt honored and exited to be able to share the story with many more people. Thanks to NOS op 3. Do you want to read more about the concept of Project Passionfruit? Click here 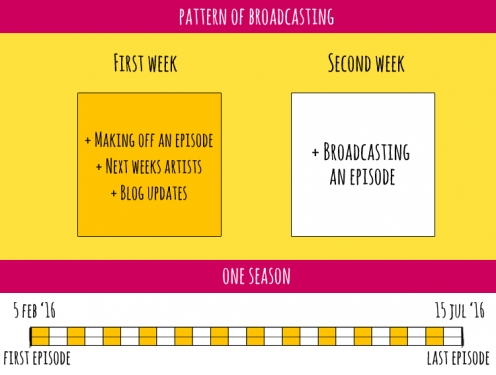 During our travels, we now and then broadcasted some of the videos. There wasn't really a clear planning. To become a better platform, we've made it easier to follow it by putting out broadcasts every two weeks. We update our website every Friday. Every second Friday we broadcast an episode from our kickoff season. You can already see which video will be coming up by checking out our video page. We have also developed a format and layout for our videos to be more recognizable.

Our goal is to become a platform for passionate artists who deserve to be seen. We want to inspire our audience by showing life is beautiful. People are awesome.