This episode started with Elio who traveled this awesome synthesizer. He just got that thing but it really did it's job. Unfortunately we were in a bit of a hurry so I really hope to see Elio again when I enter Paris on my moped.

This track is a mix of everything. It has that 'loop-based-sample-feel' everybody is invited to just show it's skill. I wanted to mix it like that and merge cultures together.

At this point we already recorded the Indian Ladies percussion group from Udupi. So I mixed it on the beat. Shri Manjunatha Chande Balaga and Alevooru where very open to show their passion. It's not common at all for a group of ladies to be performing in temples in India. They made it happen by just believing in themselves. Another great example of achieving things by just doing it. Wonderful. I'm happy to share their story.

If you've followed Passionfruit a bit you might have seen Gali Durugappa before. This guy is a real musiclover. Owner of an awesome music shop. Or should I say museum. His collection of world instruments is amazing. Also he organizes these sunset music jams on amazing rocks in magical Hampi. His wishes to travel overseas once, I really hope someone can make that dream true. But I'm sure everybody should go and see Hampi which is in my opinion the most beautiful place I've seen so far.

James Brian Ntwatwa played some chords on top of it. I think he did a great job by keeping it minimalistic. He leaved space open for other musicians which really illustrates his empathic character. James works hard to give unemployed people a platform in Uganda and his goal is to add value to people's lives. His network is huge. Later he introduced us to the Noah's Arc Children Ministery where we met bassplayer and musicteacher Andrew Waiswa. Andrew plugged in and played his bass easily. Though this track had that loop-based feel so not much later I mixed all these ingredients up in the big picture.

Love doing those kind of tracks as an editor. In video's like this one it might be harder to really follow what's happening in the song. I mean, it's not a common way to present a song at all nor an overproduced electronical production having climaxes and breakdown. I see this video as a piece of art bringing together all different sorts of skills, styles and cultures. The kytes (India) and fire artist Stevo Extremo (Australia) are showing pure joy in life. Stevo really made his audience smile all the time. Isn't that where it's all about at the end of the day? Love it!
artists 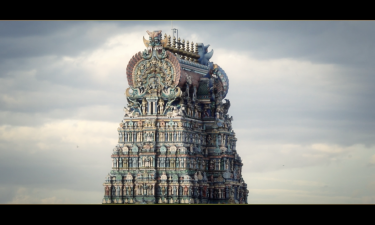