this one started with the awesome exile drumgroup from gili trawangan, indonesia. every sunset there was an opportunity for pretty much anybody to drum the sun into the sea. wonderful setup, great atmosphere. definitely worth visiting when you're going to the Gili's.

as second layer we just add some self made drum and bass from recycled materials. andrew seisun got the headphones third. this awesome 'music-dad' organised an every-friday-jam for his kids which was such an inspiring thing to see. their garage was turned into an open stage for the neighborhood. pretty much whole of the seisun family played music or surfed the ocean. great to have met you, we learned a lot from your open mind.

saul cresswell (margeret river, australia) is a special friend we've met. saul actually had the whole passionfruit concept in mind a couple of years ago. it was so nice to see his expression when we explained what we are doing. he played an awesome layer on his maschine drumcomputer and had real good suggestions for composing this one, thanks mate!

last but not least we have midge wilkinson who made this track a wrap. in inspring derby we've met him. he has such an inspiring way of thinking about our planet. his environmental comments made more than sense to us. he is building his recycled house fully made from used materials. midge is not the biggest fan of the corporate world, we'd admire his intelligence and way of living his life..

guys, you are awesome again!
artists 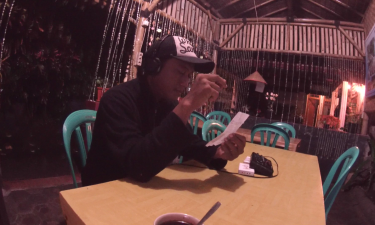