This one started with a Matty Cass song. You might know Matty from our pilot season. His impressive voice sets the tone of this track. After recording in Derby (Australia) his voice was passed on not much later to Thailand were we met Sunny.

In Pai, where tourists and locals merge peacefully and jam music pretty much all the time it was not hard to find this bassplayer. He took us to a bar him and his friends were building up. Would love to come back and see the bar after some years, i will..

After recording the Bass we met Santiago Jimenez Borges. One word; 'WOW!'. Santiago really pushed the track next level. I love the emotion in his play. He adds a lot of value to the bigger picture. The sound of his violin make the track less poppy and supports the dramatic feel.

Another supporter of this feel is the Kerala Kathakali Theatre. This traditional Indian theatre told about the same story as Matty's lyrics. Great to see different angles from different cultures focus on a same subject.

Helen Louise Jones and Syamala did the backing vocals not much later. Both having a background in drama and theatre they are the perfect team for this episode. Although these ladies are not so much on the foreground, their voice really supports a lot.

Finall we met Rahul Basu to play some guitar solo bits as the cherry on top. I really love how everybody played so empathic. You made the puzzle pieces falling into place pretty nice. 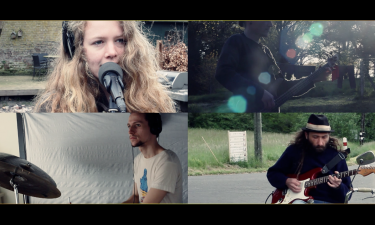