This video started with Camille Denis playing guitar and clarinet on his loop-station. This street-boy really made my day when I saw him busking. Love his gypsy sound. Though the feel he dropped in this record is more laid-back and relaxed. Perfect for other people to interact with.

In Thailand we have been recording Thanapon Sridarakul on his flute. He actually just started playing but it was so delightful to work with this motivated guy. He proves that different cultures, levels, characters and ages can come together easily in a song.

An old passionfruit talent was next. Manosh Bardhan recorded the tabla in one go. I love the deep bassy percussion sound which made the track at this point more interesting. It's has always been the challenge to mix different sounds around the world. The tabla did it pretty much in this one.

Later on we met Swami Vidhyadiraja in Wayanad, India. It was an amazing experience to stay at his place. Swami is an Indian Guru, very special energy. We are pretty down to earth people ourselves but his appearance and his curiosity were overwhelming. To me it was obvious this man is something else. When I came back the other day to film his art he knew every detail of our conversations before. His knowledge of our universe and history of the world seem to be huge. According to the feel of this relaxing track it was just perfect to show Swami's work.

Two other passionfruit friends stayed over in the Netherlands. Axel la Courte and Santiago Jimenez Borges. We did a Passionfruit on stage tour and had some amazing jams. They were both very keen to finish the record. Santiago on keys dropped a nice upright bass groove, electric piano and finished it on violin. Axel, who used to be into gipsy blues, was not shy to drop an easygoing hiphop bass. To add some power in the outro I thought it would be nice to drop a hiphop beat.

Thanks! You guys are awesome..
artists 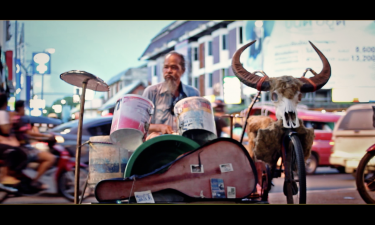